Flutter is another front end technology. It's a UI framework for mobile developers. With this you write code once and run everywhere. You just need one codebase which saves much more time and resources than building an app using iOS and Android native code.

First, let's see the flutter lifecycle in a complete picture. 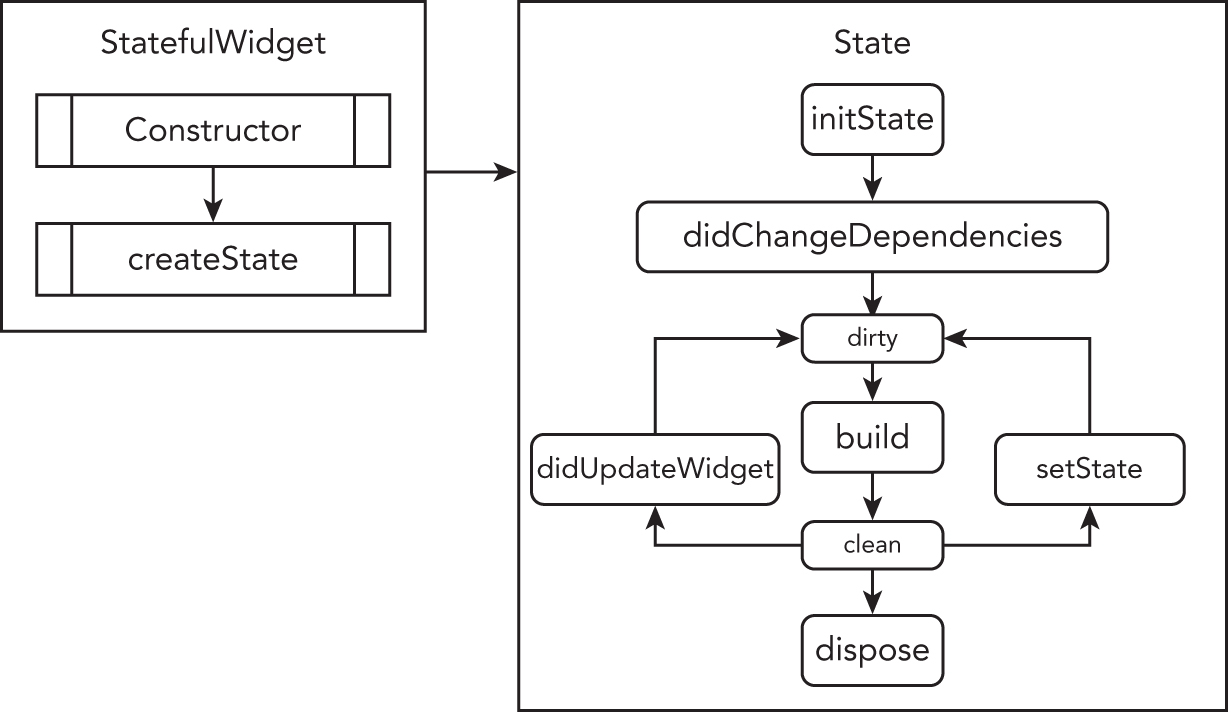 A state is an information that can read synchronously when the widget builds and might be changed during the lifetime of a widget. Let’s understand the definition.

√ Initialization process when a widget has created.

√ State change during the lifetime of a widget.

State objects are long-lived. They can tell Flutter to repaint, but can also be told to repaint becasue the associated stateful widget has been updated by outside forces.

In Flutter, (nearly) everything is a widget, and widgets are just Dart classes that know how to describe their view. They’re blueprints that Flutter will use to paint elements on the screen. The widget class is the the only view model that Flutter knows about. There aren’t separate controllers or views.

When a Flutter builds a StatefulWidget, it creates a State object. This object is where all the mutable state for that widget is held.

The concept of state is defined by two things:

√The data can't be read synchronously when the widget is built. (All state must be established by the time the build method is called)

There are two types of widgets in Flutter based on state.

All the view you see on app, they are called widgets in Flutter. So they are

This type of widgets can not be redrawn if the state changes. Stateless widgets can be drawn only once during it’s life time. That’s it’s called stateless.

Variables in flutter can be changed. If they are changed, in general build method is called. For stateless widgets, even though the variables change, the build method is not get called, thus no update the view.

Stateless widgets are dumb, it's ok to destroy them since, they just help you display information. No interaction with users.

On the other hand, if the variable of a stageful widget is changed, the build method is called and an updated view is shown on the screen.

Stateful widgets are mutable, which means this widget interact with users and send new update to the screen.

Let's go through the above code step by step

Flutter says, hey let's build a stateful application then createState() is called. Then an object is created.

Flutter framework can call this method multiple times over the lifetime of a stateful widget. For example, if the widget is inserted at multiple locations at the tree, the framework will create a separate state object using this method.

What do you want to do with this object?

Yes, let's put in the render tree and initialize some stuffs.  This is the first lifecycle method that is called when a widget is created. this is also get called before the build method.

This is called whenever the configuration of a widget change. Things like passing variables down to constructor ,

like if you want to change the animation duration when the app runs.

You also need to remember that super.DidUpdateWidget() should be the first line inside this code.

This is called when an object is removed from the tree. This could be called moving a widget in the widget tree using a globalKey.

super.deactivate() method must be called at the bottom of this function.

This is called when an object is removed from the tree permanently. For example when you want to move between widgets. If you want to move from current widget to Navigator.pushReplacement, then dispose() method would get called.

super.dispose() should be at the bottom of this method.

This method is called right after initState() and every time when you change the state variable. This method also gets called

This method can potentially be called in every frame and should not have any side effects beyond building a widget.

setState() is another important function in Flutter. We should use this when we want to make an internal change of object.  Call setState() means something has changed in this state, in this object.

newValue is the new value which is set for _mySate. And _myState would be varibale declared in a stateful widget class.