Laravel Render Html in Controller could be confusing for beginners.

In this tutorial, I will show you how to pass HTML element from laravel controller to view. At the end of the tutorial, you will also learn how to return a view from controller to laravel blade.

Before you do any coding make sure that, you are naming your view files with .blade.php suffix and they are saved in resources/views folder 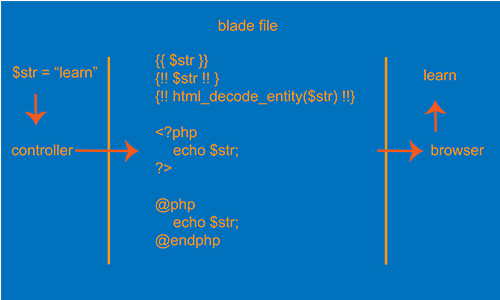 If your controller passes a string variable to laravel blade,

and if you want to display text or paragraphs which is passed from the controller, you should do like this

Within double curly braces, you should write your variable that is passed from controller to blade, and you are good to go and you will see

This is the most common way laravel render html if you don't have any tags.

For explanation,  the above statement is the same as the line below. PHP auto inverts from {{$str}} to

Here e() is convenience wrapper for echo() function. But it's already deprecated in Laravel.

Say, you have a variable $str in controller with some html tag like the below one and you want to send to blade using compact() function in laravel.

After receiving on the blade, variable $str contains HTML tag. Then you must use a single curly brace in each side and double exclamation marks on both side of the variable, and this is the most common ways of laravel not escaping  HTML in the blade template

And then your output would be like below. Remember you use single curly braces and two exclamation marks to display your variable value.

√So {{ }} curly braces print the string as it is, but {!! !!} will render HTML from a string variable. And laravel blade double exclamation should be used when you have HTML tags in your string.

The above one is really useful when you want to render HTML from database to view blade.

This is our good old PHP function which does a lot of work for you.  This function removes HTML entities from a string, what is HTML entities? They are special strings that starts with &(ampersend) sign and ends with ;(semicolon).  See the below code which contains a few HTML entities.

In the above function $str contains HTML entities and variable $str after being passed through html_entity_decode() function in blade,

So next time if you have string that contains HTML entities, just use this HTML entity decode function and your problems would be solved.

You can also use {!!html_entity_decode($str)!!} when you want laravel to render HTML from database.

You use html_entity_decode in laravel if

√You want to render HTML from database

√If your string has HTML entities

You can render HTML in blade using traditional PHP opening and closing tag. You can write

In your blade. The variable $string is coming from your controller. But it's not recommended to do like this. This is more like spaghetti code, where you put PHP and HTML together.

Laravel is famous for it's clean and readable PHP syntax. If the method mentioned in 4, looks like a spaghetti code for you then try the below one

It's one of my favorite way of writing PHP in Laravel blade.

√If your variable string includes html tags but not any html entities then just use {!!$str!!} for unescaping HTML. Becuase {{$str}} escape HTML tags meaning that, {{$str}} will ecapse html.

√If you variable contains both html tags and html entities then use {!!html_entity_decode($str)!!}

√If you render any string that is coming from the database.

In general, we don't return an entire view from laravel controller. Even if you want to do it, you can. Let's see how to return entire HTML document strings from controller.

After laravel return HTML in controller, the blade should be like below code sinppet